How much crap do you need to sell your book at a convention? Lots of crap!

BAMCon aka Berkshire Anime and Manga was my second convention. Photos below:

As usual, I packed up the car and left the house quite early… at 6:30 AM

BAMCon took place on May 10-12 in the beautiful town of Pittsfield, Massachusetts. I had been told that Pittsfield was one of those hard-hit recovering industrial towns (like so many other towns in New England), but I found it to be quite beautiful. It’s surrounded by woods, hiking trails and luxurious golf-courses. The downtown area (I’m sorry I didn’t take pictures) has a retrofitted turn-of-the-century feel with art galleries, shopping and offices in handsome pre-war structures. The place was nice, and the hotel where the convention took place (The Crowne Plaza) was nice as well.

A beautiful sunny day outside of the Crowne Plaza, Pittsfield MA.

Once I got in, I started setting up in the dealers room.

My vendor-table setup embraced a flea-market sensibility- but they did give me a nice table-cloth.

Other vendors got more fancy… check out the portable accordian-style bookshelves. That guy must have a had a 1,000 books + DVD’s crammed into a very small floor space. 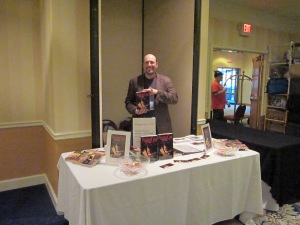 Of course, the highlight at most “cons” are the people in costumes,which many people now refer to as cosplay… I can only assume that people use the term cosplay because it sounds a bit more cutting edge that “wearing a costume”. (Interestingly, cosplay has also become one of those multi-use words that can be used as a gerund: “I’m cosplaying Darth Vader”; or a noun: “This outfit is my Star Trek cosplay”; or even a straight up action verb: “I always cosplay Mr. T.”)

Below are some of the cosplays that caugth my eye at BAMCon:

Billy Baker- a really nice guy- dressed up as: Choji Akimichi from Naruto Shippuden…. I you have never heard of Choji Akimichi, don’t worry, I had to look him up. 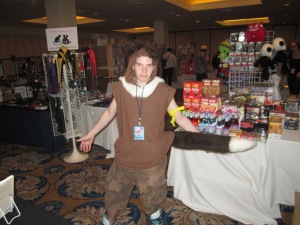 This kid was an “evolved pokemon”- I’m not sure which one.

I love this guy’s pixely visage. He was supposed to be a thing from Minecraft the video game… a creeper I think. 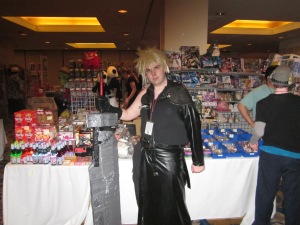 This guy’s costume is a Final Fantasy video game tribute. 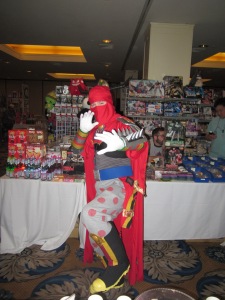 I don’t know who this is or who they’re supposed to be, but I love the ninja-assassin-in-pajamas look! 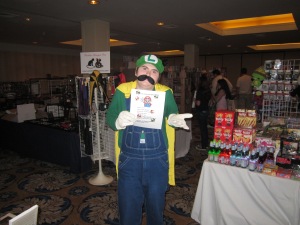 It’s Luigi! The paper he is holding has a picture of Mario and reads: “Have you seen my brother?”

I also met some of the people whom I’d interviewed including, professional belly dancer Kiwii:

Cosplayer Kiwii shows of her convention outfit. She was a wind-up dancer. If you look to the left (it’s a little hard to make out) you can see her wind-up key.

I was also joined by Eric Sutton, a good friend and great graphic designer who helped me promote VampCon by photoshopping convention-goers into vampires and adding them to the VampCon cover!

My good friend- and a terrific illustrator- the ever-dapper Eric Sutton.

All in all, I had a good time and even sold some copies of VampCon! My next con will be Granite State Comic Con in September. I’m looking forward!

Here is a tiny url that will link you to this very post: http://tinyurl.com/pkfukjv

Armand Inezian is a grant administrator by day, and a writer by night! VampCon- a dark, fantasy thriller- is his first novel. He resides in Boston with his wife, two children, three cats, and one house that needs a lot of work.
View all posts by Armand Inezian →
This entry was posted in Convention and tagged BAMCon, Choji Akimichi, creeper, Crowne Plaza, dealer's room, Eric Suton, Kiwii, Paul Hollingsworth, Pittsfield. Bookmark the permalink.