The Last Sunset, by Bob Atkinson, a Review: 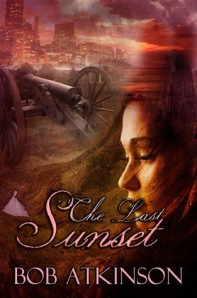 The Last Sunset by Bob Atkinson, available from Amazon.

The Last Sunset is Scottish author Bob Atkinson’s alt-history romance in which the invites us to imagine what might happen if several heroic but ordinary people fall “out of time” and arrive at a historic nexus point with a chance to rewrite the future.

How to dress for this book: I suggest throwing on the Feileadh-mhor (pronounced like “Feel-a-more” aka “the belted plaid”) which plays a prominent role in The Last Sunset, although the author spells it alternately as “phillamore”. And maybe add some boots to your outfit to keep your feet warm and dry.

If this book were an animal: It would be the scottish wild goat. A tough, stubborn, hardy breed that scrambles and rambles over the cold uplands.

If this book were a drink, it would be the uisge beatha which is described as a liquid that explodes in your stomach “like nitroglycerine”.

I had the Last Sunset on my “to-read” list for over a year, and I finally picked it up about a week ago after an unusual (for me) reading hiatus. All-in-all, I was very happy to have read this well-crafted blend of alt-history, romance and military fiction.

As the alt-history descriptor might suggest, the focus of The Last Sunset is on a terrible attack on Glen Laragain in the Scottish Highlands in 1746. The battle was the start of the destruction of the Highland people and culture by the victors, the Imperial British. In speculating on the weight of history, The Last Sunset asks two question: First: What were the long-term results of that battle and could could the British victory have eventually lead to a far worse event during our own century? And second (and really the driving event of the novel): Could a team of heroic but everyday people (with a few select rifles) drawn from different times and returned to the battle at Glen Laragain change everything? In other words, can hope flicker against the all-consuming power of war, massacre and destruction?

And so The Last Sunset follows a small village of native Highlanders from 1740’s (led by the wily and very likable patriarch, Achnacon) , two brothers from 1916, four English infantrymen from 1976, and two American tourists from 2026 all of whom suddenly find themselves thrust into a nexus in time. And, while the main plot of the novel takes place over only a few days, our protagonists will experience love and fear, hope and despair, and ultimately they will test their own humanity against the forces of fate and history.

Of particular interest to me are the characters of Corporal Andy MacMillan, 1976, and Alistair Mhor, a World War 1 veteran from 1916. In many ways, these two become key figures in the a furious battle against the British redcoats (and history itself).

I have to confess that I’ve been a bit of Scottish-literature fan since the late 90’s when I picked up a surreal short story collection by Irvine Welsh (of Trainspotting fame) called The Acid House.

I hope I am not stereotyping, but the three things that strike me right away about Scottish writing (and what makes it “Scottish” to me) are the spoken dialect, the description of the land itself, and the deepset memory of British Imperialism, and Atkinson delivers on all three accounts.

With a few notable exceptions, Atkinson scores well on the Scottish dialect. I particularly enjoyed the banter between the 4 soldiers from the 1970’s, with lines like:

“…It’s no animal, ye great pudding. What ye’re hearing is the funeral wail of the clans….”

“Ah’ve done four tours in Ireland: After the last one Ah decided there was more tae life than getting shot at by a bunch of Micks, so Ah transferred tae the training centre.”

I also enjoyed the super-thick accent of the native highlanders like Achnacon who refers to all the men as “Chentlemen” (Gentlemen):

“And yourselfs, chentlemen? You wear the breeks of the Lowlander, but I am thinking you are not King Cheorge’s men…?”

There were a few misfires however. In particular the American characters’ speech which is heavily peppered with conjunction slang like: “wouldja, couldja, and shouldja” which- I thought- made them seem weirdly inarticulate or sound a bit like Chicago gangsters in an old movie. I don’t know, maybe that’s how Americans sound to native Scots.  The other thing that got to me was the heavy use of the word “wee” (meaning “little”) which was used so often in the middle of the book that it started to drive me batty.

Overall, the middle of The Last Sunset could have used a bit of trim. I feel like the characters spend a bit too much time arguing over logistics and travel and a few conversations get repeated. A few discussions might have been edited a bit, but these are small quibbles with an otherwise solid book.

Going back to to my “big three” Scottish themes: Atkinson’s love of the highland landscape is clear throughout the book. In his author’s notes, Atkinson states that he spent a lot of time hiking in the highlands and it shows in his narrative. He almost has a poet’s relationship to the land, delivering gorgeous prose on mists, hills. the weather and the heather.

And finally, there is the issue of British Imperialism itself, or as another Scottish author, Irvine Welsh, cynically describes it “being colonized by wankers”

In many ways, The Last Sunset is a cry for redemption against this very imperialism. It is no accident that the villains are both the Duke of Cumberland and the Hanoverian Red Coats who would later systematically dismantle the culture of the highlands. The story and themes here are not so different from the Biblical Psalm 137: “By the Rivers of Babylon” (in which the author mourns their fallen homeland). Atkinson is remembering a better and more noble time when people lived in harmony with nature, and his Highlanders are those people: beautiful, hardy, clever and faithful.

Finally, do not let all my talk of poetry and themes make you think the book is some kind of slow-paced treatise and/ or travel guide. The Last Sunset is an action novel. It had blood and guts and battles. Too many “wees” aside, this book contains snappy dialogue, romance, comedy, and even one seriously crazed drunken party. The plot thrives and delivers. I will say that the ending is tinged by ambiguity, but in a good, literary way that worked for me.

Overall, Atkinson’s novel delivers. And if you are a fan of either sci-fi or historical fiction, or if (like me) you think that Scotland is pretty cool, then I have no reservations in recommending this excellent novel.

One final note: Strangely, Bob Atkinson is somewhat hard to track in terms of the social networks. He does have a blog that he occasionally updates, but it’s better to try and follow his Twitter feed which can be found here.

Armand Inezian is a grant administrator by day, and a writer by night! VampCon- a dark, fantasy thriller- is his first novel. He resides in Boston with his wife, two children, three cats, and one house that needs a lot of work.
View all posts by Armand Inezian →
This entry was posted in Reviews and tagged alt-history, Big Three Scottish Themes, Bob Atkinson, British Imperialism, colonized by wankers, Duke of Cumberland, Feileadh-mhor, phillamore, Psalm 137, The Last Sunset, uisge beatha, ye great pudding. Bookmark the permalink.