This is the truth; I have never smoked a cigarette, cigar, or pipe in my life. I’ve never tried chewing tobacco or any other tobacco product, and I am well aware of the health hazards posed by tobacco, yet I cannot entirely escape the gravity of “smoking sexiness”.

Whether it’s Clint Eastwood lighting up a stogie in one of his Westerns, or Katee Sackhoff (Starbuck of the new BattleStar Galactica series) puffing on a cigarette (where do they get the cigarettes from, in outer space?),  There’s something about the iconic image of a human face with a burning twig dangling in front that grabs my attention.

It may well be a learned response, my reaction to years of exposure to “Hollywood smoking”, or maybe the visual appeal of smoke rising and that tiny, golden-red flame that appears  when people smoke at night, or maybe the appeal of the ritual itself, hands cupped in front of the mouth, a flame rising, and that cool, vacant look that smokers get after their first pull.

Whatever it is, it’s kind of fascinating, and that brings me to my post’s topic. As I was writing VampCon, I decided that my hero, Jonathan Stoker, was a smoker. It was more complicated than that; there are some minor plot points that turn on his cigar smoking. I also want to present him as a complex guy. But, I have to admit, that at the end of the day I still feel ambivalent about having done so.

There is a long tradition of smokers in fantasy and science fiction.  Think of Gandalf with his pipe. Marvel superhero Wolverine smoking his cigars (at lease he did so in the 90’s). More recent examples include Charlie Huston’s tough-guy anti-hero, Joe Pitt, who craves unfiltered cigarettes (what does he care? He’s already a vampire.) as well as half the characters in the recent reboot of BattleStar Galactica. 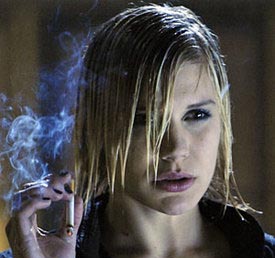 As it is, smoking made its onto my cover. The cover artist, Jonathan Banchick, picked up on the cigar theme and, on the book, we see Jonathan Stoker with a cigar clenched in his mouth. I actually objected, although not strenuously, and mostly on the grounds that when the cover image is reduced, people might not know what the cigar was, but my publisher decided to go with it.

Should a hero smoke? Probably not. But could they?  I would argue that the answer is “yes”. For the most part, they are people, and people are complicated. People sometimes make poor decisions, but it’s interesting how having that particular image appear on the cover gave me reason to pause.

Do smokers appear on book covers? On movie posters? Not so often. Not so much anymore.

Despite my right to create a hero who smokes, am I also adding (in my own limited way) to the myth of “smoking sexiness”. My guess is that I probably am, and I think that is the issue that’s bothering me.

Anyway, the cover image is locked, but I would be interested to hear what others think. Is it cool? Should heroes smoke? Should they drink? Should they know better?

Armand Inezian is a grant administrator by day, and a writer by night! VampCon- a dark, fantasy thriller- is his first novel. He resides in Boston with his wife, two children, three cats, and one house that needs a lot of work.
View all posts by Armand Inezian →
This entry was posted in VampCon and tagged cigar, Gandalf, images, Joe Pitt, Katee Sackhoff, Smoking, VampCon, Wolverine. Bookmark the permalink.