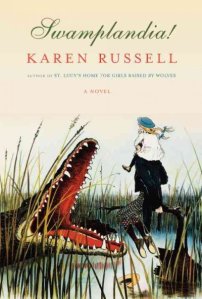 A review of Swamplandia! by Karen Russell

If this book were a drink it would be a crazy concoction, a witches brew that is flamingo pink on top and fizzy green on the bottom, served in a martini glass and spewing foggy vapor like someone dropped dry ice into it.

If this book were an animal it would be a fantastic chimera. An alligator covered in birds feathers that can talk and sing and fly.

How to dress for this book: shorts, t-shirt and lots of bug repellent.

Review Preview: One brilliant facet of Swamplandia! is that it keeps you guessing as to the actual genre of the novel (is it literary fiction or fantasy?) until very near the end. Besides this riddle, the book is also carried by strong writing, powerful description, doses of comedy, and swamp lore. I have a just few quibbles, in particular the curious portrayal of non-swamp dwellers, but this story is solid and very well written, and I highly recommend it.

Reading Swamplandia! by Karen Russell– a novel about a off-kilter, semi-dysfunctional family dealing with their mother’s death and the slow collapse of the alligator wrestling theme park that their family has run for generations– is a bit like wrestling with a ever-shifting chimera. For me, the biggest pull of the book was the suspense of not knowing what genre- exactly- I was reading until near the end. Is it a story set in the real world, but filtered through the perspective of somewhat crazy, superstitious people, or is is a a story set in a magical world that borders our own?… Not knowing the answer to this truly raised the stakes of the narrative and left a cold, disturbed feeling in the pit of my belly. This is particularly true in the case of Ava Bigtree, the youngest member of the family, who slips into the deep swamps in the company of the strange, shadowy Birdman. The bad news for Ava, however, is that whatever world she is residing in, there is a very good chance that something very bad will happen.

While the story (particularly Ava’s) has a dark undercurrent, Russell did a solid job of keeping me in the narrative by using doses of comic timing, fabulous description both of Florida’s landscape (I always admire writers who can use the American land itself as a main character) and of our protagonists” internal mindscapes, amazing prose, and riveting bits of swamp history and lore.

The dark-edged Ava storyline is further counterbalanced by the book’s other main plot, the story of her older brother, Kiwi Bigtree, who leaves the family theme park island and goes over to the mainland, where he experiences something that (to me) felt like a blend of a coming-of-age story and a Hollywood stoner-movie (ala Harold and Kumar) that has some orange-peel flavored laughs (often at poor Kiwi’s expense- although they are partly earned because the kid has a massive ego) and some excellent writing and provides us with some relief from the difficult situations that Ava faces.

I had a few just a few quibbles with Swamplania! One was the the middle child of the Bigtree clan, Osceola, who (after much set up) vanishes about a quarter of the way into the book, leaving poor (13 year old) Ava to fend for herself, and that made me kind of not like her. The other thing that rubbed me in the wrong direction was Swampandia!’s uncharitable view of life outside the swamp. People who reside in the city or suburbs of Florida are unilaterally portrayed as either mean-spirited, condensing, vapid or some mix thereof, and at times it felt like I was listening to some rant by a college undergrad determined to convince of how “bad” society is. It would have been nice to to see the non-swamp dwellers a little more fully-realized.

Despite these quibbles, however, is a first rate first novel. It got style and elegant, magical prose to spare, and – as I mentioned above- it does a fabulous job of keeping you guessing as to the true nature of the story and the world in which it is set. I highly recommend the book.

Armand Inezian is a grant administrator by day, and a writer by night! VampCon- a dark, fantasy thriller- is his first novel. He resides in Boston with his wife, two children, three cats, and one house that needs a lot of work.
View all posts by Armand Inezian →
This entry was posted in Reviews and tagged Karen Russell, Review, Swamplandia!. Bookmark the permalink.